Polar bears in Canada are the least abundant bear species.  Little chance you spot a polar bear during your travels in Canada. Unless you know where to find them. That's what this page is about... 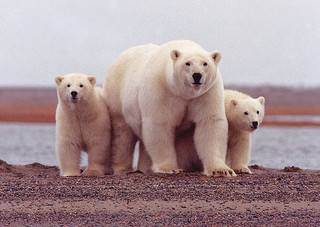 With approximately 20.000-25.000 polar bears left worldwide, this bear is on the World Conservation Union’s red list as vulnerable specie.

With the exception of pregnant females, polar bears in Canada are active year-round.
Unlike grizzly bears, polar bears are not territorial.
Like grizzlies and black bears, adult polar bears live solitary lives.

The polar bear is native within the Arctic Circle encompassing the Arctic Ocean, its surrounding landmasses and seas as far south as James Bay and Newfoundland Island in Canada.

The Canadian polar bear inhabits 7 out of 13 provinces and territories: the Yukon, Northwest Territories, Nunavut, northern Manitoba, Ontario, and Quebec as well as Newfoundland and Labrador.

The polar bear‘s diet mostly consists of fat and meat from marine mammals such as from ringed and bearded seals.  Seals need holes in the ice in order to breathe. The bears wait on the ice for the prey to come to the surface of these breathing holes.

Polar bears are capable of fasting and living of fat reserves for up to several months. This usually happens during late summer and early fall when the sea is unfrozen and they cannot hunt for seals.

Only a very small part of the polar bear’s diet consists of other wild foods, including reindeer, birds, eggs, rodents, shellfish, crabs, moskox, and other polar bears. Occasionally they eat small amounts of plants, including berries, roots, and kelp. 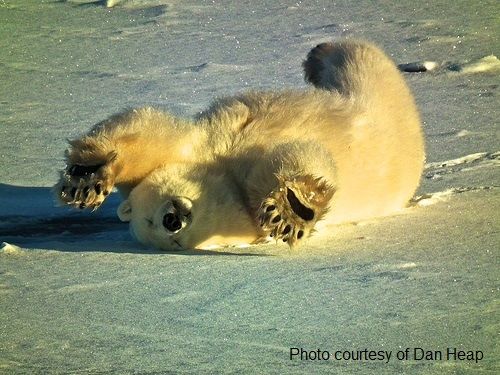 The habitat of polar bears in Canada

The polar bear tends to frequent areas where sea ice meets water in order to hunt the seals that make up most of its diet.

In some areas like James Bay, the ice melts completely each summer. Therefore, polar bears in Canada are forced to go onto land and to wait for months until the next freeze-up.