orca spotted in the Johnstone Strait

The best spots to go whale watching in British Columbia 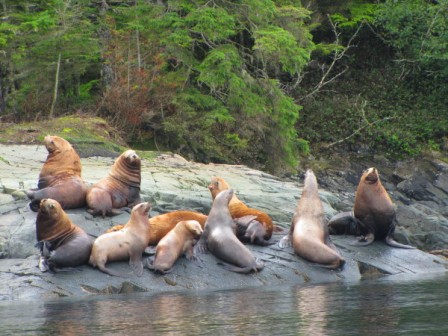 a group Steller sea lions resting on a rock

You will most likely hit open water while whale watching on the west coast of Vancouver Island.

Prevent motion sickness by avoiding any coffee before your outing and by using just a light meal some while before the start of your trip.

Pro for whale watching in the Johnstone Strait

As the ocean water in the Johnstone Strait is very calm, there is no or at least very little chance of, getting motion sickness.

British Columbia has a diversity of whale species, which are the focus of interest for whale watchers.
Most species are migratory and are present in food-rich BC waters, only for a specific time-frame.

The orca or killer whale, belongs to the Dolphin family and suborder of the toothed whales.

There are three different subspecies of killer whales found in BC waters.

Read the page Whale Watching Canada, to check when to view Orcas.

A Humpback male whale is famous for its magical song.  This migrating baleen whale forages near shorelines on krill, plankton and tiny fish.

After 3-5 shallow dives, it regularly shows a tail fluke when diving for deeper waters.

There is a good chance of spotting Humpback whales during whale watching tours in British Columbia. When lucky, you might see a Humpback breaching or fin slapping.

Almost hunted to extinction in the last century, the Humpback makes a comeback in BC waters although it is still listed as threatened.

Read the page Whale Watching Canada, to check when to view Humpbacks. 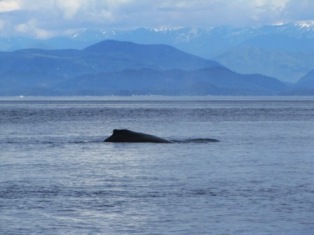 Only found along Canada’s west coast, the Grey whale is a bottom feeder.
This whale takes several breaths before it dives down.
Close to the bottom, it turns on its side, and takes a mouthful of sediment from an area of shallow sea floor. It uses its baleen to filter tiny little creatures from the ocean floor.
They consume 400-1000 kg (880-2200 pounds) of food on an average summer day.

Each spring these giants migrate along the west coast of Vancouver Island.
Some Grey whales spend all summer in the food-rich waters of BC.
Others continue travelling up north, all the way into Alaska.

Read the page Whale Watching Canada, to check when to view Grey whales.

Dolphin and Porpoise species, such as

are incidentally viewed while whale watching in British Columbia.

I have seen many dolphin and porpoise on whale watch trips in the Johnstone Strait.
On the other hand, I haven’t seen any dolphins yet on any of my whale watching tours on the west coast of Vancouver Island.

Best season to go whale watching in BC

The best seasons to go whale watching in BC are definitely spring, summer and fall!
Most whale species spend the Canadian winter in warm southern waters.  This is where the calves are born.  During spring, most whales migrate north, often passing BC waters. Some are going as far north as the Bering Sea, Alaska. Others stay all summer in - food rich- BC waters. 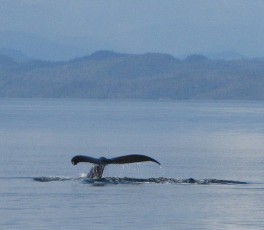 tail fluke from a humpback whale in the waters around Telegraph Cove, BC