Whale watching is one of the things you REALLY HAVE TO do during your travel in Canada. Make sure you find the right area and season for best chances to spot these Kings of the Oceans.

This page is about where and when to view these magnificent marine mammals.

As most whales are migratory, they visit rich waters for feeding.
By locating the foraging waters for several whale species, we know where to expect regular visits from these giant ocean residents.

an orca In British Columbia's waters

The first time I went whale watching in Canada, we heard orcas communicate.  I had goose bumps and tears in my eyes.  It was so beautiful....

As I joined many whale watch tours in western Canada, I added a specific page about whale watching in British Columbia.

Canada has a diversity of whale species (cetacean), which are the focus of interest for whale watch tours.
Most species are migratory and present in food-rich Canadian waters, only for a specific time-frame.

The best season to go whale watching in Canada varies per species.
Continue reading to find out when the different species inhabit Canadian waters.

Most whales spend the Canadian winter in warm southern waters.  This is where the calves are born. During spring, most whales migrate north, often passing Canadian waters. Some are going as far north as the Bering Sea and Davis Strait. Others stay all summer in - food rich- Canadian waters.

The Blue whale is the biggest animal on earth.
Weighing up to 200 tons/181 metric tons and measuring 100 feet/ 30 metres in length, this migrating giant belongs to the suborder of baleen whales. 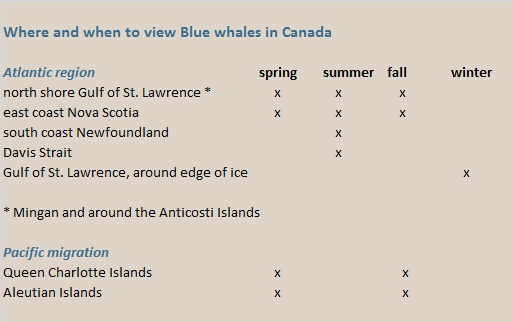 This migrating baleen whale forages near shorelines on krill, plankton and tiny fish. After 3-5 shallow dives, it regularly shows a tail fluke when diving for deeper waters.

A Humpback whale male is famous for its magical song.

With a maximum length of 10 metres (30 feet), the Minke whale is one of the smallest baleen whales.

It eats small school of fish, zoo-plankton and krill.
Minke whales in cold areas migrate south in wintertime. The ones in temperate regions seem to be resident to a specific area.

Fin whales are migratory and they belong to the suborder of the baleen whales. 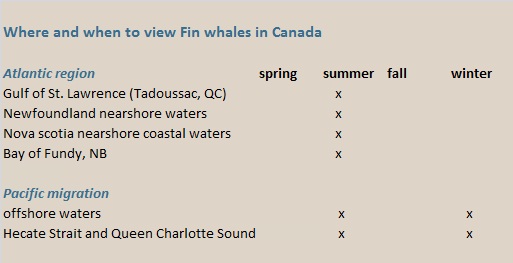 Only found along Canada’s west coast, the Grey whale uses its baleen to filter tiny little creatures from the ocean floor.
The Grey whale’s skin is home to barnacles and sea lice. They make the outer skin look like ocean rock.

These giant whales can travel great distances. Within a year, they migrate up to 20.000 km -12.500 miles- from their warm winter home in Mexican waters to the cool summer feeding grounds up north, all the way into Alaska.

Whalers named right whales, as they were supposed to be the ‘right’ whale to hunt.
These migratory baleen whales were almost hunted to extinction. Right whales are still the most endangered large whale species in Canada

Right whales feed on krill and plankton.  In contrast to their pray, Right whales reach an impressive maximum length of 18 metres -59 feet-, and can weigh up to 100 tonnes.

The orca or killer whale, belongs to the Dolphin family and suborder of the toothed whales.
There seem to be three to five different types of orcas. More research is needed to review the taxonomy.

Read the page whale watching in British Columbia for more information regarding Orcas. 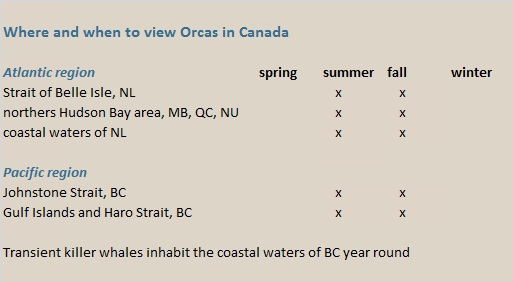 The Beluga is a white coloured, toothed whale and belongs to the monodontidae (narwhal) family.
Their diet consists mainly of fish and invertebrates, such as squid, clams, sea snails, and crabs.

The Beluga's home range reaches from deep Arctic waters to the Saguenay estuary in the St. Lawrence River in Quebec.

The long-finned Plot whale is a toothed whale, and just like the orca, it belongs to the Dolphin family.

These very social animals have, unfortunately, the tendency to ‘strand’ themselves. In most situations, when one whale strands itself, the whole pod will follow.

These migrating dolphins are nicknamed ‘potheads’ as a result of their big, round forehead.

Other Dolphin and Porpoise species 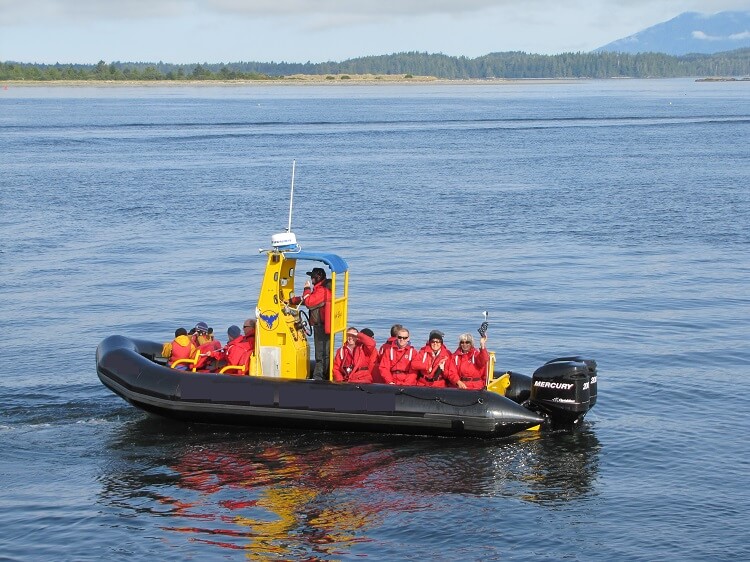 whale watching on a Zodiak