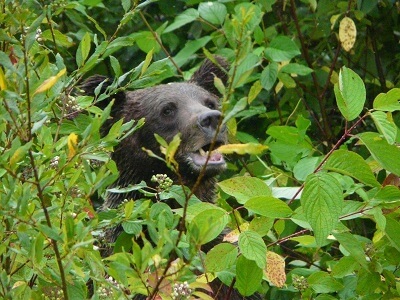 a surprise grizzly looking at us from the bush. Photo credit: A.Burgers

Would you like to spot grizzlies in Canada?
If your answer is “Yeah sure, under safe conditions” keep on reading!

A grizzly can be distinguished from a black bear by a distinguished hump on its shoulder, a more dish shaped face and by longer claws. When living in the same environment, a grizzly is bigger than a black bear.

Read my story of a close call

left: a light coloured grizzly. Right: a typical black bear. Watch the difference in shoulder hump between the two!

The shoulder hump is an identifying characteristic. Not the colour!

not all grizzlies in Canada are 'grizzled' -greyish-, nor are all black bears black! Left: grizzly. Right: black bear

There are around 25,000 grizzlies in Canada of which 15,000 inhabit British Columbia.
The other 10,000 grizzlies live in the Rocky Mountains of western Alberta, the Yukon, and the Northwest Territories, southwestern Nunavut, and northern Manitoba. 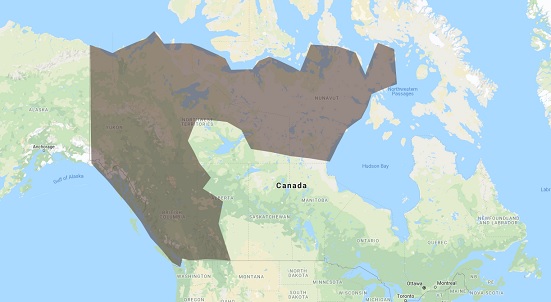 the distribution of grizzlies in Canada (dark coloured area)

Grizzlies in Canada are found in the Arctic tundra, in sub-alpine meadows, in dense forests, and closer to the Pacific, around inlets and salmon spawning grounds.
They prefer remote areas and rugged mountains that are undisturbed by humans.

The grizzly bear’s diet changes with the season and the individual habitat. 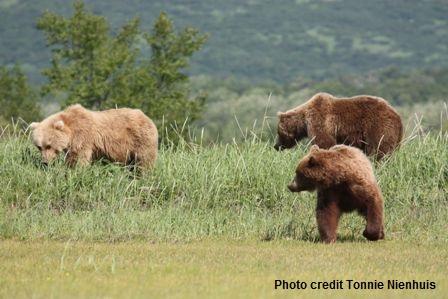 Bear watching: when and where to see grizzlies in Canada

Grizzly bear watching is often a highlight for many people visiting Canada. To increase your chances to spot grizzly bears, it helps to know what kind of terrain they prefer. This varies with each season. 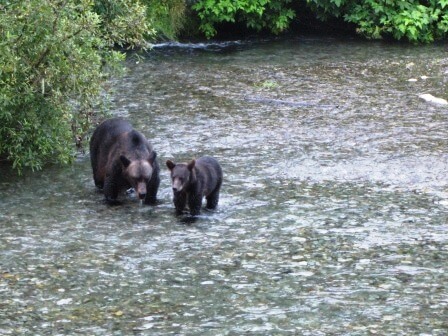 mother and cub looking for salmon

During fall, grizzly bears are almost non-stop foraging, as they need to fatten up for hibernation.

The K’tsim-a-deen Grizzly Sanctuary in Northern British Columbia is, without any doubt, the best location to observe grizzlies in their natural environment!

Check this amazing documentary made by my friend Ken.

On vacation in grizzly bear country 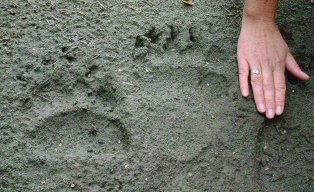 front and rear foot print of a grizzly bear

Grizzly bears are symbols of pure untouched wilderness.
They are extremely powerful wild animals and very unpredictable. Always make sure your encounter with bears is safe. Review the bear watching etiquette to avoid dangerous confrontations.

You might be lucky enough to spot a grizzly during your travel Canada vacation.
Join a bear watching tour with an experienced guide for safe bear watching!

After a couple of years of hiking around bear country, I started to underestimate the threat of a confrontation with bears. One day my other half and I were hiking in September around Bella Coola, British Columbia.  The trail wandered through impressive old growth forest and we were clapping hands and singing along the trail. Making sound is one of the best strategies to avoid dangerous confrontations with bears, and that’s what we did. So far, so good...

After a few miles we reached an airstrip for bush planes. As we had a clear view for a couple of hundred yards, we stopped making noise. If there would be any bears around, they could see us from a distance and therefore, wouldn’t feel threatened. That would us give the opportunity to take some nice pictures and to enjoy the sighting, right! Unfortunately, we didn’t see any bears around the airstrip...silly us.

At the end of the airstrip, the trail made a sharp turn into the enchanting forest again.
And there it stood, the biggest grizzly bear I’d ever seen!  Wow! At least 660 pounds – 300 kg – and a rear end of a rhino was standing not even 40 feet -12 metres- away from us. My heart pounded in my throat as I grabbed my bear-spray while my other half grabbed the camera. The bear hadn’t seen, heard, or smelled us and was foraging the forest floor, rhino end facing us.

While my partner was determining how to get the best pictures, my survival instinct told me to back off as silent as we could. I anxiously beckoned to leave the scenery while my hubby gave me a disappointing look, pointing at his camera. However, my fearful face won and we both retreated slowly backwards as silent as we could while keeping an eye on Mr. Rhino. This had been a close call!

What went wrong here?
We should have made noise before entering the forest. The bear would be warned and would have moved away as a bear has a natural fear for people.

What could have happened? 3 Scenarios:
# 1 - Worst case, the bear would have been hungry and had noticed us. Because the bears are preparing for hibernation this time of year (September), they usually are a bit nervous and tense. They must have enough fat reserves to make it through the winter. Bears that are short of fat can get very aggressive and they sometimes even prey on humans. This bear could be an easily agitated grizzly that would want us for dinner.  A person hunted by a grizzly bear rarely survives such an attack. Do whatever you can to escape and defend yourself when a bear hunts you.

# 2 - Second worst case, the grizzly bear would have been surprised by us when we entered the forest. It could have heard the camera click and it might have felt driven into a corner. An attack out of self-defence could have been the result.  In case of a defending attack, lay belly down fetus position and protect your head and neck with your hands. Stay still and wait for the bear to retreat.

# 3 - Another outcome could have been that the grizzly had noticed us and would have run off as the trail continued ahead of the bear, and therefore it had all the space to do so. Unless it knew there was some kind of danger ahead of it, this would have been a very likely possibility.

No matter what, always stay calm (easier said than done) and never run away.
Do not look a bear in its eyes, as it might feel provoked by this.

What did we do right?
As the bear had not noticed us we retreated slowly and as silent as we could. While retreating we kept an eye on the bear’s rear end.  In case it would have turned around and approached us, we could have made ourselves tall while talking with a calm voice to the bear. If it would still keep approaching is we keep have used the bear-spray.

Check this sign to learn how to avoid dangerous confrontations with grizzlies in Canada. 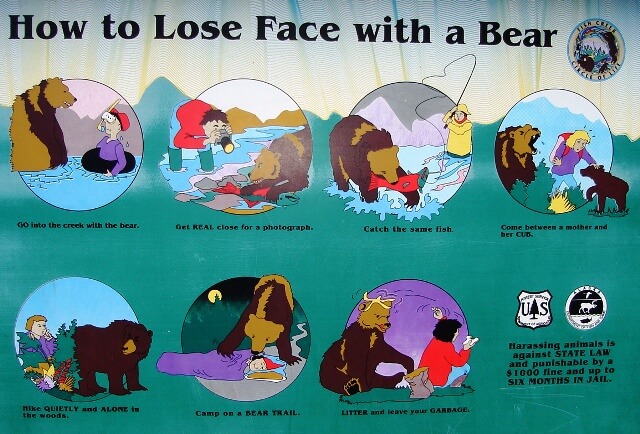 HOW TO LOOSE FACE WITH A BEAR 1: Get into the creek with the bear. 2: Get REAL close for a photo. 3: Catch the same fish. 4: Come between a mother and her CUB. 5: Hike QUIETLY and ALONE in the woods. 6: Camp on a bear trail. 7: Litter and leave your garbage.