The aboriginal people of British Columbia call this white bear a ‘spirit bear’.

This subspecies of the black bear is named after the zoologist Mr. Frank Kermode who studied this white furred black bear early 1900’s.

On average 1 out of 10 black bears in the Great Bear Rain Forest of west-central British Columbia has white fur.  The highest concentration of these bears lives on and around Princess Royal Island.

Imagine you would spot one while travelling Canada! 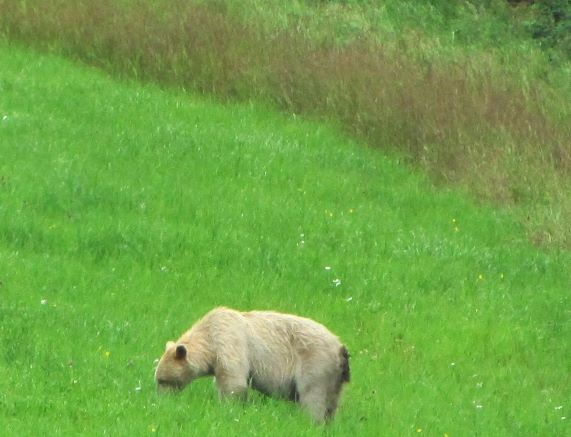 a Kermode bear close to Kitwanga, British Columbia. I was so lucky to catch this one on camera!

About the Spirit bear

A white black bear: about traits and Mendel's laws

The Kermode bear; known as Spirit Bear or Moksgm'ol

The spirit bear lives in west-central British Columbia.  It is also known as Moksgm’ol (white bear), to the Tsimshian people of this area.

The native people of BC believed that the white bear had a connection with the spiritual world.
When fur trade arrived in western Canada, native people never mentioned the existence of the white black bear.  Thanks to keeping silent about the spirit bears, these supernatural bears are still around.

As a biologist and your tour guide Canada, I will try to explain why a black bear can be white. 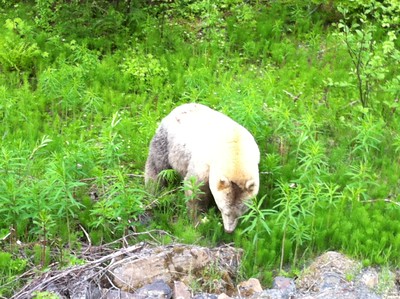 The white coloured fur is a recessive trait. This recessive trait is the result of a DNA mutation.
The black bears white fur can only be expressed when body cells carry two of the same recessive (white) alleles.

As the black allele is dominant, all black bears with two black alleles, as well as the bears that carry two different alleles (heterozygous: one black and one white fur allele), will be black furred.

Only bears that carry two recessive alleles (homozygous recessive for fur colour) in their body cells show a white fur.

Mendel’s laws: how a white bear can have two black coloured parents..

Reproductive cells (gametes) carry only half of the chromosomes that body cells carry.
Therefore, all gametes have just one allele for every trait in them.
Allele pairs (two of each trait) form again during fertilization: the moment ovum and sperm fuse.

Hence, it is possible that a black bear mom has a white furred cub and a black furred cub in the same litter. Assume mom and her partner are both physically black and heterozygous for fur colour.
Chances are 25% a white cub will be born and 75% for black cubs. 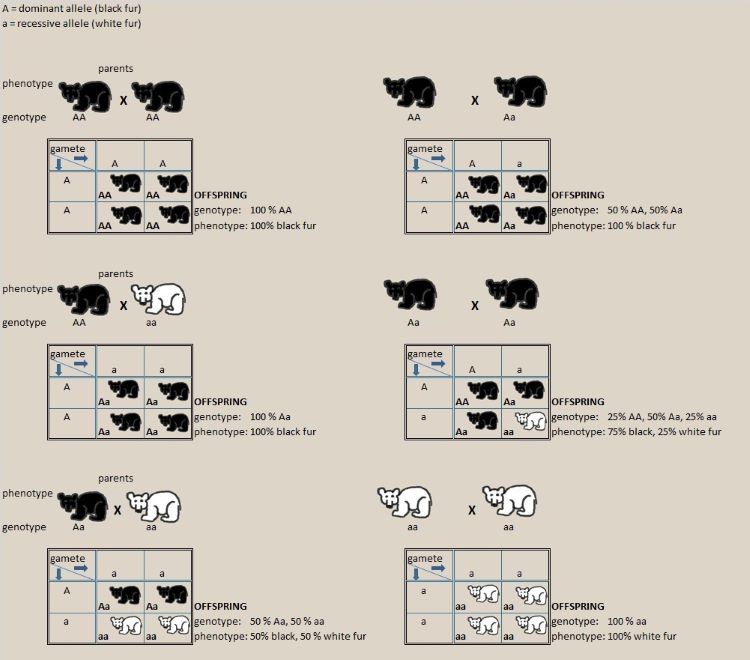